The main part of the design is that each server is a BGP router, and redundant network linkage can be created with BFD and ECMP.

In this article, we further describe how to implement the design using BIRD routing software on Linux. Since a lot of prerequisite knowledge is required, we have prepared the following two tutorials. If you are not familiar with BGP or BIRD, please read them first.

In Neco, every server is a BGP speaker. If each server has a unique autonomous system number (ASN), every peer becomes eBGP. This model is called AS per Compute Server.

Alternatively, a model that uses a single ASN for everything in a rack (top-of-rack switches and servers) is called AS per Rack. In this model, peers inside a rack become iBGP.

Other variations are possible, but basically, either of these should be chosen. We chose AS per Rack model mainly because our network engineers asked so. From their point of view, AS numbers coming from servers look like aliens.

The diagram below shows an example of AS per Rack model with spine-leaf topology. 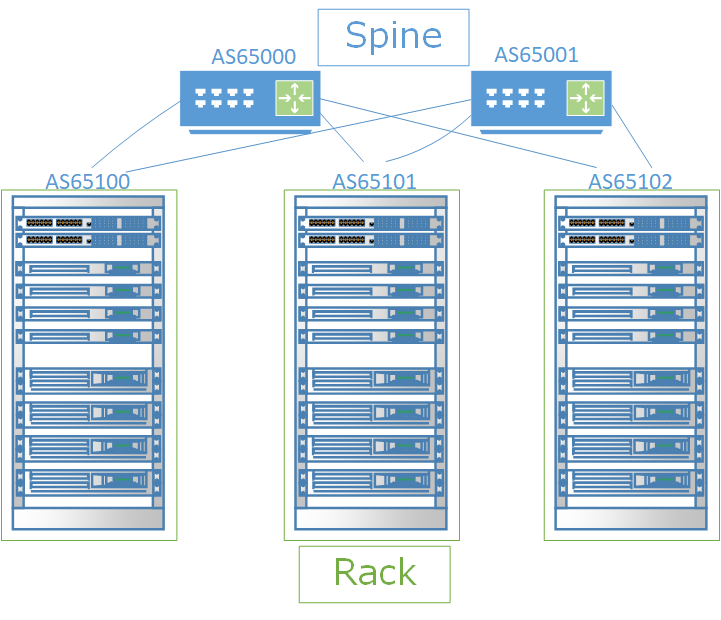 Network inside a rack

As described in the design article, each rack has two top-of-rack (ToR) switches for redundancy. Since we do not use MC-LAG, each ToR switch has its own layer-2 subnet.

To reduce peering connections, each ToR switch is configured as a route reflector. This way, each server needs to establish connections only with two ToR switches.

Note that two ToR switches need not to peer with each other because both have all routes to servers in the rack and connects with all spine routers. This is an example of an iBGP configuration that does not require a full mesh.

The diagram below shows a server in a rack establishing connections with two ToR switches. 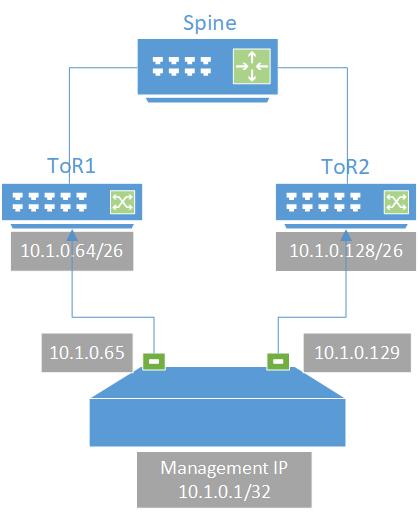 An example of the latter is that a Pod can have only one IP address of the running node in status.hostIP.

Let's see how to implement the management IP address on Linux.

Linux has a virtual network interface called dummy. The server can receive packets to the IP addresses assigned to its dummy device.

To create a dummy device and assign an IP address, execute the following commands:

This creates node0 as a new dummy device and assigns 10.1.0.1/32 to it. To advertise the IP address of node0, add the following configurations to bird.conf:

Linux kernel selects any IP address whose scope is global when it sends packets through unbound sockets. Therefore, IP addresses other than those assigned to node0 must have link local scope. Otherwise, TCP connections could be established using non-management IP addresses.

With systemd-networkd, the scope of an address can be specified as follows:

By the way, when I encountered this problem, I thought it might be a bug of Linux kernel. So I sent a question to netdev (the mailing list for network-related Linux development) with a reproducer and got a reply that this behavior is intended and valid with a hint to limit the scope of the addresses.

Since iBGP does not change NEXT_HOP attribute when redistributing routes from eBGP peers to iBGP peers, such routes may be rejected by iBGP peers if the NEXT_HOP address is unreachable. To avoid this problem, there are several options as described in Getting Started with BIRD Routing Software.

An easy and often-used workaround is to enable next hop self feature in iBGP routers. However, this is not the best option in our network model because next hop self would involve ICMP redirects.

An ICMP redirect message is typically sent when a router receives packets and sends them to another router in the same layer-2 network. This is to notify the server that sent the packet that there is a direct route to the destination. Sounds good? Unfortunately, there are too many reasons to avoid network configurations involving ICMP redirects, as listed below:

Why do ICMP redirects occur?

Because all servers in the same layer-2 network are BGP routers communicating through ToR switches working as iBGP route reflectors. If a ToR switch enables next hop self, it would send ICMP redirects as follows:

The problem is that next hop self cannot distinguish routes from routers in the same network.

Rewriting NEXT_HOP on the receiving end

Our solution to this problem is to configure BIRD to accept routes with unreachable NEXT_HOP. Think of this as next hop self on the receiving end.

The following setting rewrites the NEXT_HOP attribute of routes coming from a router outside the layer-2 network to the address of a ToR switch.

You: Wait, why don't you giving up the route reflection? That would ...

We decided to run BIRD by ourselves and do not rely on BGP features of these plugins because, as we have seen so far, we need to configure BIRD substantially to implement the management IP and to cope with ICMP redirects.

Also, we want to use MetalLB to implement LoadBalancer service for Kubernetes. However, Calico and MetalLB have issues when used with MetalLB.

Our current networking stack consists of:

We will introduce Coil in another article.

We built a highly scalable software-defined network using pure layer-3 technologies such as BGP and BFD.

Thanks to our new modular network plugin Coil, we can combine MetalLB, Calico, and BIRD to build a fully-featured Kubernetes network.